In just 12 months young Brisbane four-piece The Gametes have left an indelible mark on the rich local scene with their unique, absurdist approach to performance and manic punk energy.

The new instalment in the space tragi-comedy surrounding Space-Diplomat Comet Jones introduces new protagonist The Man Of Thumbs. A short-but-powerful parable for modern times, the hook-laden tracks surmises that even though they “took their rest, took their sanity” that all is fine when “production output efficiency is better than ever”. 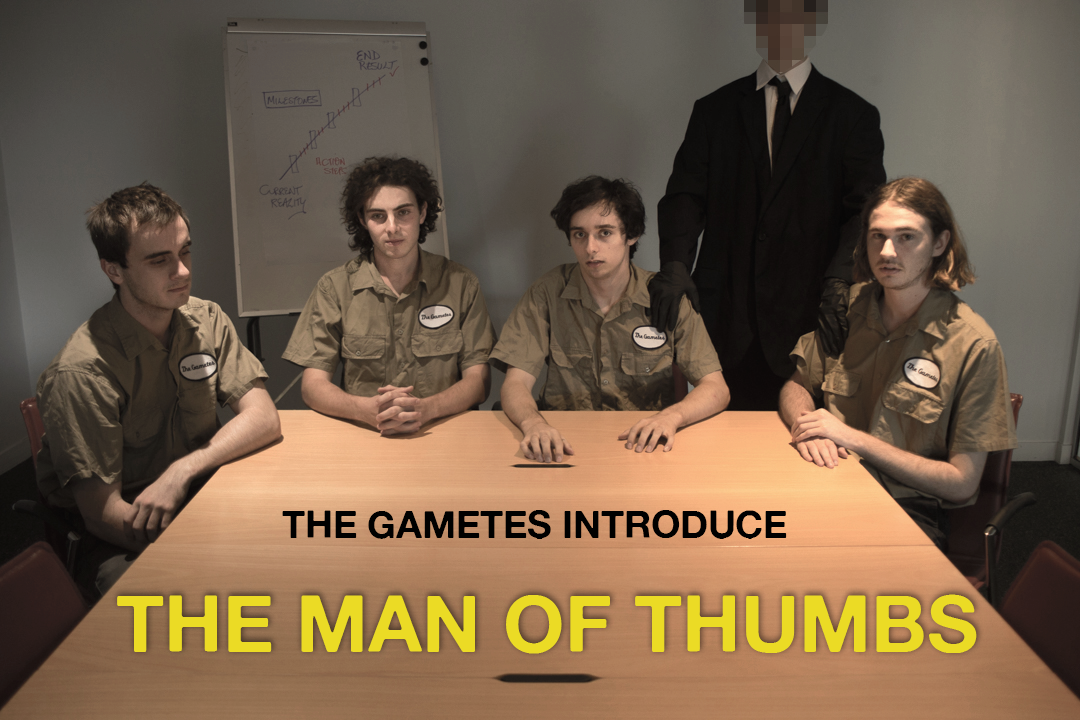 The Gametes, in accordance with The Takiyama Corp. Proliferation Protocol, are proud to bring you this exclusive message:

The Gametes’ FRESH, UNIQUE new single, The Man Of Thumbs, has FINALLY arrived into the hands of the consumers, and not a minute too soon! Using REAL-TIME DATA from Takiyama Corp.’s EXTENSIVE satellite network and INTER-PLANETARY drones, the band has once again proven that GREAT RESEARCH and OBEDIENCE can indeed breed GREAT RESULTS.

Adding a NEW CHAPTER to the sprawling, epic parable of Space-Diplomat Comet Jones, The Gametes introduce to you a new character, THE MAN OF THUMBS, an UNSIGHTLY vermin with a TRAGIC past. The Gametes invite you to LAUGH, CRY, and experience other HUMAN EMOTIONS as you are pulled into the piteous world of The Man Of Thumbs.

Despite some feeble protests from The Gametes, C.E.O Mr. Takiyama is happy to announce that the new single WILL be launched on the FIRST NIGHT of The Gametes’ residency at THE FOUNDRY, May 4th, at the STROKE OF MIDNIGHT. There, patrons can gain a keen insight into the research processes of Takiyama Corp. with a LIVE TESTING EVENT.

Beyond that, The Gametes will be continuing on the residency on May 18th with the PREMIERE of THE GAMETES MOVIE: Written, directed, produced, edited by The Gametes, with an original score played LIVE by The Gametes. Though strict NDA’s limit information on the final night of the residency, May 25th, all that can be released is the title, the world record-breaking event: LUMPFEST 2018.

THE GAMETES’ THE MAN OF THUMBS MAY MULTI-MEDIA RESIDENCY AT THE FOUNDRY, BRISBANE

The Gametes’ new album
The Astronomical Calamities Of Comet Jones
will be released through Coolin’ By Sound this August.

5 years ago today, CBS-001 was born! Launching the label’s first vinyl release with the crackin’ debut by @thighmasterband 🥳 🥳
@fullpowerhappyhour were lucky to play a fantastic live set, headlining @sunlitsoundsfestival on the weekend. ☀️ Here with and oldie but a goodie, Fun, off their debut EP - go check it out on their bandcamp. They are currently working on new material, since releasing their LP earlier this year via @coolinbysoundrecords and have been adding a few new songs to their live sets lately, so stay tuned! 🤗#watchthisspace #brisbanemusic #brisbane #livemusic #indiemusic #janglepop #coolinbysoundrecords #fullpowerhappyhour #sunlitsoundsfestival #coolinbysound #redeyeworldwide #bandcamp
Roll call; who’s coming? The now sold out and iconic Brisbane one day festival, @sonicmasalafest is on this Saturday at @thetriffid with performances from @fullpowerhappyhour and @tapeoff along with friends @adeleandthechandeliers @spiritbunnyhop and soooo many more. ❤️
🤍❤️ CBS REPRESENT!! 😎
GIMMIE FULL POWER!
@dumbthingsrock are back! 😍 We were so lucky to catch their first live show since releasing their gorgeous LP record ‘Time Again’ via @coolinbysoundrecords in Nov 2019.